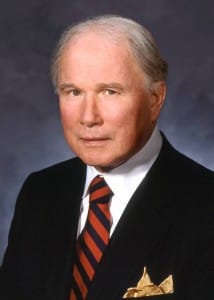 For over 50 years, Arthur Collins, Sr. forged a reputation as a man of vision and as a creative real estate developer. In the 1950s and 1960s, he led the development division of Collins-Tuttle and Laird Properties in New York City. Recognizing opportunities in suburban areas, he founded Collins Development in 1970 and developed the first condominium project in Connecticut called Lyon Farm. His firm created mixed-used developments in the waterfront communities of Harbor Plaza in Stamford, Connecticut, and Palmer Square in Princeton, New Jersey. During his career, Collins oversaw the development of over three million square feet of office space and over 1,500 residential units. With a reputation and expertise for bringing new life to downtowns, he redeveloped the historic buildings of Washington Street in Norwalk, Connecticut and the JP Morgan estate in Princeton, NJ. His commercial and residential projects have received numerous awards for the responsible use of land as well as captivating design. Arthur Collins, Sr. died in 2005 and his legacy lives on.

Under the leadership of  Lynne Ward and Joseph Cotter, National ReSources is one of the most highly regarded development firms in the New York/Fairfield region.
National Resources is a specialist real estate development and investment firm that focuses on the redevelopment of corporate and industrial sites. NRE has been built on a solid foundation of acquisitions, leasing, and redevelopment but with the unique value-added dimension – Sustainability. NRE has redeveloped over $1 billion of projects with some of the world’s largest capital partners. Most significantly, NRE has been able to achieve these objectives while producing strong financial returns for investors. NRE is best known for its landmark Hudson River waterfront residences and its innovative i.parks.

John R. Nolon is a Distinguished Professor of Law at Pace Law School where he teaches property, land use, dispute resolution, and sustainable development law courses and is the Founder of and Counsel to the Law School’s Land Use Law Center.

He was an Adjunct Professor at the Yale School of Forestry and Environmental Studies for 15 years beginning in 2001, where he developed a curriculum concentration of five land use law and policy courses. He is known nationally for his development of legal frameworks for local environmental law, sustainable development, and low carbon land use. Professor Nolon received a Fulbright Scholarship to study sustainable development law in Argentina in 1994-95. At Pace Law School, he has won several awards for outstanding scholarship and teaching. Pace University designated him a Distinguished Professors in 2015.

As Counsel to the Land Use Law Center, Professor Nolon provides technical assistance and training to local officials regarding the land use review and approval process and works with students to produce best practice reports on emerging issues in urban revitalization and environmental sustainability. He has received national awards for his work with municipal leaders from the American Planning Association and the International City Management Association. The New York Planning Federation awarded him its Lifetime Achievement Award in 2018.

Clayton H. Fowler and Kim Morque Selected for 2016 Collins Award
Under the leadership of Clayton H. Fowler and Kim Morque, Spinnaker Real Estate Partners, LLC ( Spinnaker) is one of the most highly regarded development firms in the New York/Fairfield region. As a second generation company, Spinnaker has been a key contributor to the enhancement of many of the major cities and municipalities in Connecticut, New York and Nationwide. Read the full story here.

The Arthur Collins Sr. Visionary Award for Leadership in Land Use (The Collins Award) recognizes a person, team or organization whose efforts demonstrate a commitment to the highest standards of responsible real estate development in our region. The award honors the legacy of New York area developer Arthur Collins Sr., a longtime ULI member who is regarded as one of America’s most innovative real estate developers during the last half of the 20th Century.

ULI Westchester/Fairfield is sponsoring The Collins Award to recognize a person, team or organization whose innovative and creative vision has resulted in a completed project or body of work that reflects the ideals of the Urban Land Institute. The mission of ULI is to provide leadership in the responsible use of land and in the creation of sustainable communities worldwide.

Historically, the award has recognized  “a person, team or organization whose innovative and creative vision has resulted in a completed project that reflects the ideals of the Urban Land Institute,” the award honors the legacy of Arthur Collins Sr., a longtime ULI member widely regarded as one of the nation’s most prolific and innovative developers during the last half of the 20th century.

The award honors the legacy of New York-area developer Arthur Collins, Sr., a longtime ULI member, who is regarded as one of America’s most innovative real estate developers during the last half of the 20th Century.