Register Yourself Register Two or More
View Event Attendees
Please join ULI Westchester/Fairfield for a timely discussion on the future of our cities and suburbs on March 11th , from 12:30-1:30 pm EST.
It has been suggested that cities are losing their appeal and that the flight to the suburbs resulting from the Covid pandemic is just part of a long-term and inevitable trend. In many places, the very urban character that has always attracted people to cities has been badly altered by the current situation and may take years to fully recover. The question is whether people are willing to continue to live in high density conditions when one could simply live and work remotely from a single family house in a rural setting. In the midst of the pandemic, it’s tempting to focus on issues of density purely from the perspective of social distancing and urban flight—and what the urban future will look like based on that trajectory. But this is a temporary condition and there are greater challenges facing cities that will have a longer lasting effect on how cities are shaped and built in the future. The bigger factors affecting  the future of cities are less about social distancing and more about changes in transportation, energy and climate—all of which can be addressed through increased densities in all urban settings.
How do low-density communities transform to a higher density? What are the consequences of the public domain as urban density increases? Climate change may have been eclipsed by the pandemic as the primary concern for the past year, but this is still destined to dramatically affect urban form in the very near future.  How will cities adapt to increased rain events and hotter temperatures? Come hear these questions asked and answered.  Q & A period to follow. AICP CM currently pending.
Moderator
Carl W. Ordemann, AIA
Prinicipal & Director Commerical & Mixed Use Practice Leader, Perkins Eastman Architects
Speakers:
Vishaan Chakrabarti
William W. Wurster Dean of the College of Environmental Design at the University of California, Berkeley & Founder and Creative Director of Practice for Architecture and Urbanism (PAU).
Christopher Stienon, AIA, AICP, LEED AP
Founding Principal, Urban Matrix
Event Sponsor Mr. Ordemann, as a Principal and Director, has more than 35 years of experience in the profession and has managed numerous projects for the firm, work totaling more than 60 million square feet of new construction and 30 million square feet of interior alterations. As the firm’s practice area leader for the commercial mixed-use practice, Carl directs large teams on complex projects across a variety of program types, including commercial, residential, mixed-use, and government work. In addition to his award-winning portfolio, Carl has contributed his expertise as a guest critic at Harvard University’s Graduate School of Design and in teaching roles at New York University’s Real Estate Institute and the New York Institute of Technology. He has managed the New York offices commercial, corporate and residential studio and the Stamford office. Prior to joining Perkins Eastman, Carl was the Managing Principal in charge of both Perkins & Will’s New York City and Shanghai offices, and before that was a Senior Partner at HLW where he also was the President of their Design Build and Project Management division HLW Services.
View in Member Directory Will open in a new window 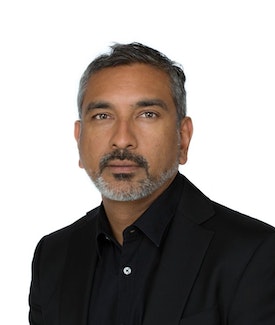 An architect, urbanist, educator, and author, Chakrabarti designs and advocates for a sustainable, attainable, and equitable urban future centered on human connectedness. He advances these goals as the founder and creative director of his own global architecture studio, PAU, where he leads complex design projects such as Brooklyn’s Domino Sugar Refinery, Philadelphia’s Schuylkill Yards, Ford Motor Company’s Michigan Central Station project in Detroit’s Corktown, major new campus architecture, and a unique urban village in Ulaanbaatar, Mongolia. After teaching at Columbia University for the last decade, Chakrabarti became the William W. Wurster Dean of the College of Environmental Design at the University of California, Berkeley in 2020; the world’s leading public school of architecture, landscape architecture, and city planning. He is the author of the highly acclaimed book, A Country of Cities: A Manifesto for an Urban America, and is working on his second book about architecture and human connectedness for Princeton University Press. Chakrabarti also served under Mayor Bloomberg as the director of planning for Manhattan in the aftermath of 9/11, successfully collaborating on efforts to save the High Line and rebuild the World Trade Center. Chakrabarti lectures internationally, contributes articles and op-eds to the New York Times, has appeared on CBS, MSNBC, National Public Radio, and has presented on the main stage of TED.
View in Member Directory Will open in a new window Christopher Stienon is an architect, and an urban designer with a long history designing and managing projects that contribute to the public realm and the design of cities. As both a licensed architect and a certified professional planner, and having worked with municipalities, planning agencies, private developers and institutions, Mr. Stienon has gained a broad familiarity with both the public and private sector forces that shape the modern city. Mr. Stienon has worked for several renowned architecture and planning firms in New York City including Skidmore, Owings and Merrill, Beyer Blinder Belle, Cooper Robertson and Partners, EDAW, AECOM and most recently Stantec. This has provided him with a strong understanding of nearly all aspects of urban design and large-scale master planning including architecture, city planning, historic preservation, landscape architecture, transportation, infrastructure, and environmental sustainability. He is currently serving as an Adjunct Instructor at Fordham University's School of Visual Arts where he is teaching a course on Urbanism; the history of the city. For several years he was a visiting Assistant Professor at the Pratt Institute, Graduate School of Architecture, Department of Urban Design. Christopher holds a Master of Science in Architecture and Urban Design from Columbia University, a Bachelor of Architecture from California Polytechnic State University, San Luis Obispo and attended the Ecoles d'Art Americaines in Fontainebleau, France. He is a full member of the Urban Land Institute and the Urban Redevelopment Product Council, a member of the American Institute of Architects, the American Planning Association, and the American Institute of Certified Planners. He is also a LEED accredited professional.
View in Member Directory Will open in a new window